One of the hottest niches in the internet marketing community is Search Engine optimization (SEO). Everyone dreams of top search engine rankings for competitive keywords because they know that this would be the equivalent to printing money on auto-pilot. 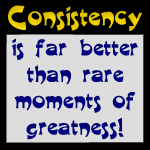 Can this still be done though? Is ranking on top of Google still possible – even with competitive keywords?

Getting a ton of free targeted traffic around the clock is a reality for many website owners, and yes, it can become your reality too.

First, there really is no magic formula to top search engine ranking. There is, however, one ESSENTIAL element you must perfect in order to make top ranking – for competitive keywords – happen for you, and that is: Consistency!

We can have all the SEO knowledge in the world, but until we make things happen on a consistent basis, we will not see massive results.

I am not saying “being fluent in SEO” is bad. In fact, I recommend consistently educating yourself on the topic if you are serious about using SEO as a marketing vehicle. A solid guide I would recommend starting with, would be – what I call – the SEO Bible by Matt Hepburn.

SEO is changing more rapidly these days than I change my undies. It sounds gross (on my part), but I read a while back (on SEOMoz I believe) that Google updated their algorithm approximately 2.5 times a day in 2012. Most of these updates were minor tweaks, but then we had a whole zoo of animals thrown at us as well, so – keeping your facts straight (as to what works and what does not work anymore) is CRITICAL if you want to not only survive, but thrive with top rankings.

Do you remember the whole “Google Sniper” buzz by George Brown? It was a great product when it first launched in 2011, and though it is still selling hundreds of copies every day, the majority of the guide was outdated only a few months after it’s launch – thanks to a handful algorithm updates Google brought about.

Looking back, Google brought out one update after the other – like the Exact Match Domain (EMD) penalty for example – that crippled the very foundations of what the guide taught to exploit.

Another one of the ideas was to put a handful of articles on the site and then – more or less – let it sit. It worked great back in the day, but that does not work so well today. Google likes to consistently see new content getting added to a website.

In other words, keep the content coming. Update your website/blog with at least one new post every week. I actually took the liberty to cross check my blogs (and those of my wife) and found that blogs that got new content on a consistent basis (at least once a week), drastically outranked and outperformed blogs that had way more content yet were not updated regularly.

Take this blog for example: It used to get a ton of search engine traffic on a daily basis. I was not good at keeping it updated though (it isn’t my main money maker) and pretty much all search traffic disappeared after a while. However, this year I have been fairly good at adding new posts regularly – and it is already proving to pay off.

I plan on sticking with it and post at least once a week – just to bring it back to life. It has become a bit more of a personal blog for me (even more so than our travel blog) so I do not feel right about outsourcing content for it. Having said that, I am actively outsourcing content to iWriter for some of my other money maker blogs. My goal is to get one new piece of content on all of my sites at least once a week.

It means a huge increase in monthly expenses for me, but I know it will pay off in the long run. Google likes to see new quality content getting added regularly and – unless that changes – I will continue feeding it to them.

Link building is that one thing webmasters try to take shortcuts with. Yes, there are some pretty cool WordPress plugins out there that automate some of this for you (thinking of course about Samson Elite, Doc Presser, or Social Zon) and they are all fantastic, but that should not be the extent of your backlink building.

Now, I have posted many times before that I outsource pretty much all of my backlink building (if not to Fiverr than to my virtual assistants) but let me take this a step further and add some “consistency” to it as well.

What if once a week we would sit down for an hour – strictly to familiarize ourselves with our competition and leverage them to boost our ranking? What if – instead of an hour a week – we habitually did this for just 10 minutes a day? Success is rarely achieved by doing something magnificent once – it generally comes as a result of small habits practiced on a consistent basis.

I am of course talking about blog commenting. Leaving a nice comment on a competitors site – that has your name link back to your site – is a good way to steal authority, linkjuice, as well as the much sought after “targeted” traffic. Also, since Google prefers seeing a high percentage of a site’s backlinks come from niche related sites, getting backlinks from competitors is PERFECT!

A good way to find targeted blogs that allow commenting, is by entering specific search strings. Here are 2 that I have used with great success in the past:

Just replace keyword with a broad niche keyword and do a search on Google. Unless you use a long tail keyword, you will find dozens (if not thousands) of blogs you can comment on.

It is a lot of work, I know, and it might not seem worthwhile right off the bet, but trust me when I say: the day will come when it will pay off!

What it all comes down to is this: how much time a day would you be willing to dedicate to getting top rankings for your money site? Would it be worth 10 minutes a day? If not, I think you are in the wrong business. 🙂

Commenting on other blogs for 10 minutes a day really is not much, and chances are you will need a lot more than that to get the results you want, but why not start small? Commit 10 minutes a day and go from there. The key here – again – is consistency. Anyone can spam a hundred blogs per minute with a software, but think longterm. Go the extra mile and you will have less to worry about should Google release another critter.

Many years ago I listened to an interview with Armand Morin (one of the biggest internet marketing gurus to date) who said he had made it a habit to write one article every night before going to bed. He insisted that becoming successful online wasn’t as much complicated as it was a consistency issue.

I said “Yeah right!” back then, but couldn’t agree more with him now 😀

Even if you know nothing about SEO, consistently putting point #2 and #3 into practice can – with time – result in your site getting a TON of targeted traffic. Not just as a result of traffic coming through your comment links (though that too will happen), but much more so because of improved search engine rankings.

My wife does not know a whole lot about SEO, and yet her site outperforms a lot of my sites by some 20,000 unique targeted visitors every month. Her secret? Point #2 and #3.

I might have a lot more SEO knowledge than her, but she is consistently putting out content (at least once a week) and also consistently leaving value-adding comments on her competitor’s blogs (she insists they are colleagues & friends, lol). It took time but – much to my envy – she built up an empire with those 2 simple habits.

Here is to reaching new heights in 2013!