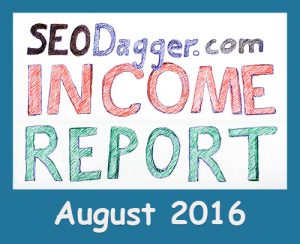 I’ve always wanted a roof-top balcony. Now we got three of them: One for morning Yoga (ya right, lol), one for breakfast, and one to enjoy a glass of red wine in the evenings :).

Enough bragging though. Let’s dive into August’s income report for this blog.

IMPORTANT: I never include earnings from ventures unrelated to this blog. I own and am a partner in a bunch of online business ventures, but – for the sake of a fair case study – only earnings directly related to SEODagger.com will be noted.

That is all I can – with certainty – attribute to this blog.

This blog (SEODagger.com) profited me $225.16 in spendable cash in August. Not too bad at all. In fact, it was my best month to date with this blog.

I will publish a post soon on how that happened, and how SEODagger.com is on track to getting over 1000 Google search visitors in September. It’s quite fascinating.

How much time did I spend on this blog in August though? Not much. All I did was write two posts: the July income report and the press release service review post.

I doubt I spent more than five hours total writing those two. I did spend too much time trying to figure out different video editing software for the press release review video though. I’m still not happy with the way it turned out but I know future videos will be much better because of what I learned doing it.

Let’s just say I learned a lot in August. Not just how to (not) work with various video editing software, but I also spent time on personal development, learning Spanish, learning/testing all things SEO, etc.

If I were to describe August with one sentence it would be this: I learned a lot!

Going into September and beyond, I want to do more product and service reviews. I know the quickest way for me to scale this blog’s income would be to create my own product or service, but I don’t have time for that (yet).

So I will do the next best thing: Review products and services I use, get those reviews ranking (like I did with the eBook cover post), and start collecting affiliate commissions from them passively.

Next month is going to be one year since I started posting these income reports, so – although not bad for a side project – it is time to step things up a few notches.

The plan? To go back to publishing one post per week again, create and upload one video per week to YouTube, and get busy building backlinks to said reviews.

Check back next month to see how I did 🙂

One thought on “August 2016 Income Report”