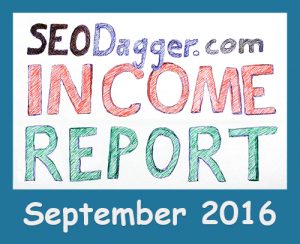 On one hand I’m excited to be writing this blog post because September was an exciting month – business wise – for my wife and I. On the other hand I laugh in embarrassment because I didn’t even think of writing this income report till yesterday.

It almost slipped my mind. Which probably explains why my previous post was August’s’ income report.

I guess that says a lot. This blog simply does not have the priority to me that it perhaps should have – thanks to more exciting other ventures – more on that later. I do need to get back to documenting my SEO strategies on here though because I KNOW some of you greatly appreciate when I share case studies and the income does tend to reflect my efforts as well.

For now though, let’s break down how much money this blog made in September.

Before I break it down for you, let me start with my usual disclaimer:

IMPORTANT: I never include earnings from ventures unrelated to this blog. I own and am a partner in a bunch of online business ventures, but – for the sake of a fair case study – only earnings directly related to SEODagger.com will be shared.

With that out of the way, how did SEODagger.com do?

I know there were likely a few sales for my Samson Elite plugin that came through this blog, but as promised a few months ago, I will stop tracking them here.

Same as with income, I will only track expenses that directly apply to this blog. For example: I do have a few SEO tools and services that I pay for on a regular basis, but unless it’s an expense I wouldn’t have without this blog, I won’t list it as an expense here. I hope that makes sense.

I just realized that was my exact expense from last month, hehe. Cool!

Going through all my previous income reports on this blog, I realized September was a record month for SEODagger.com. Meaning, it was the first time that it left me $255.76 USD in spendable cash. Nice!

Considering I did even less work on it in September than I have ever done any other month (since publishing these income reports), I’d say it’s pretty darn good. I wonder what would happen if I just let it sit and never do anything with it again? Just teasing.

In all seriousness though: I’m addicted to passive streams of income. Sure they take a LOT of work and upfront investment to set up, but once the income is flowing, it’s unbelievably satisfying.

I spent a lot of time helping optimize my wife’s site (Leelalicious.com) in September. It wasn’t totally planned (although I have always helped with behind the scenes stuff), but she had a couple things go viral on her which resulted in a HUGE income month for her. It was by far her best month… ever.

What excited me the most about it though was that close to 90% of her earnings were hands off. As in, she did not have to put in extra work to earn it. It certainly made her very happy, and of course I’m super proud of her!

One could say September was so good to us that I almost forgot about this blog. I plan on changing that soon though!

Last month I mentioned how I wanted to go back to doing regular posts (one per week) again but it simply did not work out. As is evident with this being the first new post since I wrote that, hehe.

I do have a few plans lined up for SEODagger.com though. Most of it is scheduled for the new year (2017). Mainly because other niches tend to be more profitable during the last quarter of the year – my wife’s food niche being a good example – so the plan is to focus heavily on making the last few months of 2016 as profitable as possible before focusing more heavily on this blog again.

Intentions are always good – for sure – but let’s see how things will actually progress. How did your September do?