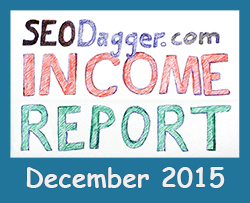 Decembers – for me – are like Sundays: I can’t wait for them to end!

Don’t get me wrong. I can appreciate a day off and absolutely love spending time with family, but when you do what you love, it’s hard to take a break from it.

That doesn’t mean you shouldn’t take the occasional break though.

I remember times when I would work around the clock, 7 days a week. It wasn’t healthy. In fact, you can only do it for so long before it drives you crazy, or worse – you burn out. So, spend one day a week away from the screen – it will do you and your business good 🙂

My dislike for December months is that they have ALWAYS been the least profitable months for me. People are spending a ton of money, but very little of it goes towards Internet Marketing stuff – especially SEO stuff.

The opposite is true for my wife’s food blog. This December was a record month (earning wise) for her even though she took a LOT more time off than she usually does. She was blown away and of course I am super proud of her.

Enough with the off topic sentiments though. How is this blog doing?

Disclaimer: I will link to sites that I promoted throughout this blog in November and that I earned money with. If you click on any of the links or buy through them, I MAY earn a small commission at no extra cost to you. Having said that, I will never promote something I do not believe in and/or use myself. End of disclaimer!

If you remember from November’s income report, we needed this blog to generate $569.09 for it to hit my goal of $1000 by end of year. I mentioned I could probably do it if I worked on it around the clock, but since I don’t spend much time on it (usually less than 5 hours per week), I had a feeling it wouldn’t happen.

Let’s look at how we did:

Theoretically, if you count RankCrew credits as earnings, my earnings from this blog went up $108.80 from last month. Nothing to write home about, but definitely a step in the right direction. Deep down I feel like it went down though and had hoped for a bit more actual earnings instead of just credits but hey… considering my little effort so far, I can not complain.

If you divide that by the 14 posts I wrote for the blog in that time frame, that is exactly $51.87 per post. Not too shabby!

The best part for me though is, these posts will continue to earn me money for months and years to come. Sure it’s nice to see some instant returns on your efforts, but it’s the long term (passive) income I’m truly excited about.

As mentioned in last month’s income report, I wanted to do at least two guest posts on other blogs in December to drive traffic and to slowly start building strong backlinks to this blog from other niche related sites. I have been using this approach for my niche sites for many years and it has been a SOLID strategy (to get backlinks and traffic), but is a LOT of work.

I did manage to get in-content backlinks from three different SEO blogs. None of them are huge blogs and none of them have a significant following, but they do have decent SEO metrics. So I still considered the endeavor a success.

Theoretically I could have just gone and subscribed to a package over at Lightning Rank and gotten solid Private Blog Network (PBN) backlinks, but decided I did not want to spend any actual money on advertising for this site in 2015.

I did however redeem some of my piled up RankCrew credits and ordered the “High PR Web 2.0 Links (100 sites)” package that I pointed at the home page of this site. I greatly prefer links from established sites (or PBN sites) – especially when linking to internal pages – but hey, I’ll make anything work for me if it’s free 🙂

A friend of mine recently wrote how he finally managed to take a few days off over Christmas – something he hadn’t done all year because of work. I wrote back and said I felt like all I had been doing in 2015 was take time off.

As an entrepreneur I can’t help but feel I could and SHOULD have worked more, but the family man in me says “Naw… you did alright. Family first!”

All around it was an excellent year for us.

My business (overall) did not grow as much as I had hoped. I can’t complain though. Considering all the exciting stuff happening in our personal lives in 2015, it did alright.

My wife’s food blog on the other hand drastically exceeded both of our expectations. She put her nose to the grindstone and made huge things happen with it in 2015.

So between the two of us, things – as far as business is concerned – balanced out perfectly!

I’ve never been as excited about a new year as I am about 2016. Not because of new year’s resolutions (I can make resolutions any day of the year), but because I know it will be a HUGE year for us as a family.

My wife and I sat down a few days ago to go over business plans for 2016. The big word in our conversation that we kept coming back to was “fortification”. As in, finding ways to strengthen the passive cash flow for both of our businesses.

There will always be good months and bad months (as hinted at before), but the objective for both of us now is to make sure that even if we have a bad month, it will still be a decent month income wise.

Example: We agreed that in my wife’s case it would make a huge difference if she would have an evergreen digital product or two (of her own) that she could consistently make some money with for months and years to come. Just a little something that would supplement her various other streams of market/season depended income sources.

In my case, it would mean focusing on at least one or more sources of traffic that isn’t dependent on search engines as much as SEO is. Algorithms change and people search for different things at different times of the year, so having a more consistent source of traffic – even if I have to pay for it – would help fill in the gaps.

What about this blog?

I won’t do anything drastic with this blog for the first 3 months of 2016. My main goal right now is to finish up a couple bigger projects I’ve been working on. I’m hoping to be done with them by March of this year.

Starting in March I plan on doing a live case study on this blog where I will set up a brand new site (haven’t decided on niche yet) and do a complete beginning to end walkthrough video series for it. It will cover everything from finding a good domain, setting up the site properly, adding content to it, getting it ranked, and making money off of it, etc.

I have a lot of experience doing this with my own niche sites and – starting in March – I plan on showing step by step how even a complete newbie can do the same and start making money online. So be sure to keep an eye out for that.

Aside from that, I plan on keeping things pretty simple into the foreseeable future.

That means I will:

I am also working on a basic SEO guide – showing how I rank my niche sites – and will be using it to attract new readers for the blog soon as well. I am hoping for that to be done before I go on another vacation to Krabi, Thailand later on this month.

I never intended to hustle and turn SEODagger.com into an overnight success. The plan always was to keep it a side project – something I never spend more than 5 hours per week on. At least until it earns me enough money every month that focusing more on it would actually make financial sense.

Why? Because I have a ton of other projects that need my attention and also because I wanted to show that this is something ANYONE can do part time.  Most people have jobs that they go to 5 days per week, so 5 hours per week is something just about anyone should be able to set aside for a side project like this IF they really want to.

Again, if I can take an unprofitable site and make it profitable while working on it VERY part time, so can anyone else. That is sort of the theme I want to keep going on this blog.

Before I forget: Starting with January’s income report (the next one), I will also start tracking the expenses this blog incurres. This will help give a clearer picture of just what is all involved in starting and growing a blog like this. So be sure to check back for that one. I think you will be pleasantly surprised 🙂

Although the blog did not reach that low target of earning me $1000 by December 31, I am quite pleased with what it did earn me. Again, considering how little time I invested into it, it did pretty darn good.

Also, considering I did not spend any actual money on marketing it (something I usually do right off the bat with my niche sites), it could have done a LOT worse. Imagine if each of my three income reports so far had shown “$0.00 Earned”. It wouldn’t have been very inspirational.

I don’t have any grand plans on making this site huge in 2016, but I believe if I keep doing the slow and steady I have been doing so far, I should have no problem scaling it to $1000 per month by end of 2016. Not bad for a part time side gig. Not bad at all!

How are your projects coming along? Any breakthrough plans for 2016?