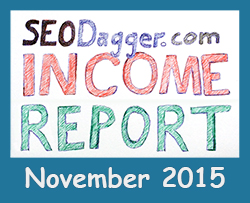 November was a big month for me. Not necessarily income wise (although I have to yet log into my accounts and see how I did – especially with this blog), but much more so on a personal level: I turned 30. Scary!

I tried poking fun at it saying I just did a software update to version 3.0, but truth is, 30 is a scary number. Especially if you get there right after turning 25 (at least that is how it felt). Hehe!

I worked on SEODagger.com less in November than I did in October.
First, I found my writing time (per post) decreased significantly. I like to think I have gotten more efficient at doing them, which would definitely be a good thing.

Secondly, I did not do any active marketing. This is NOT a good thing. I had planned on doing a couple guest posts to help promote this blog and drive some traffic to it, but I didn’t even go out to comment on other blogs. That was the least I should have done.

You could say it was a lazy month for me – at least as far as this blog is concerned. I could (and definitely should) have done more – especially considering I wanted to make $1000 between October 1st and December 31.

Last month (if you remember from my previous income report here) I confirmed earning $124.48 plus $120 in free advertising credit in October as a direct result of this blog.

Let’s see if we did any better for November.

Disclaimer: I will link to sites that I promoted throughout this blog in November and that I earned money with. If you click on any of the links or buy through them, I MAY earn a small commission (which would positively reflect on the next income report) at no extra cost to you. Having said that, I will never promote something I do not believe in and/or use myself.

With that disclaimer out of the way, I should also say that this ONLY includes earnings I can directly trace back to this blog. If I made a sale through my list or any of my many other ventures, it will NOT be listed below.

It is natural for humans to expect things to progress and increase over time – especially where money is concerned – but I am just happy this blog proved itself profitable again.

Truthfully, as little work as I put into it last month, I am ecstatic it still made me money.

Will it hit it’s target? It certainly could, although I have a feeling it won’t.

If I committed to making it happen by working around the clock on promoting it, I know it could do it. But as you know, this blog (at this point) is a small piece of a huge puzzle for me, so it would be unwise for me to abandon all my other projects to solely focus on this alone.

If you only have one blog though, this would certainly be the way to get into profits fast. In my case though, my time (especially this time of year) is better leveraged on some of my more seasonal projects (at least for now).

If you remember from my previous income report, my personal goal for November was to spend more focused time while working, as well as while with family. As noted before, I believe I made great progress in that regard – especially where work is concerned.

I definitely could (and need to) do a lot better though!

Which is why I just now – as I’m writing this – went ahead and deleted some apps from my phone that were inviting distractions into my life. I realized I had put them at a very convenient spot on my iPhone screen where I would open them – habitually – every time I opened the phone.

So moving forward into December, I have 2 areas in my personal life I want to focus on:

What about SEO Dagger?

My goal for this blog this month is to get more exposure. So if you have a blog in a somewhat similar niche that you would be open to me doing a guest post on, please let me know 🙂

I went ahead and set up a pinterest account for this blog last month (check it out here) and will eventually reorganize my other social accounts too, but then it will be a matter of learning to actually use them to drive traffic. I am not too sure I will get started on that this month though.

My main aim – marketing wise – is to do 2 guest posts on other SEO / IM type blogs to help drive traffic.

I managed to publish 5 posts in November. Like I said before, that is pretty much all I did, and yet earned over a hundred dollars. Meaning I got paid roughly $21 per post.

Would you write a post for someone else for $21? I know a lot of writers – who are even more experienced than me -that will do it for even less. And yet can’t get themselves to write a post for their own blog. I always cringe at their lack of vision.

I am not saying this to beat down freelance writers. Not at all. I outsource to a lot of them. But what I am simply saying is, most of them could do so much better – financially – than what they are doing by simply writing for themselves too.

This is what they call Passive Income: You do the work once, and yet get paid over and over again for it!

It wasn’t a bad month. Getting paid to practice a skill is always good. Even if it was less than hoped for. Also, seeing how some older posts are starting to make me money without me directly promoting them is also a good sign.

While taking a step back to look at the bigger picture, one thing became clear to me: I need to start focusing on actually marketing and driving traffic to this blog. I think I’ve had a decent streak of quality posts which act as a good foundation, now it’s time to make those posts profitable by getting them read.

All in all I am happy with where month two took this blog, but am looking forward to have it do a little better for this month (December). Stay tuned!