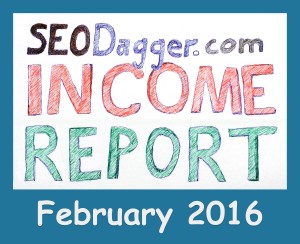 Wanna know what I hate most about Februarys? Even when it’s a leap year, they are super short.

February this year wasn’t just a short month, it was also another busy month. Not so much business wise, but very much so in my personal life.

We were busy arranging our move from Chiang Mai, Thailand to Hoi An, Vietnam. Back when it was just the two of us, we would pack our carry-ons and three hours later be on a flight to a new destination. Not sure if the little one is to blame, or if we finally matured a bit, or perhaps my wife and I are starting to get old, but it all takes a little longer now.

Not to brag, but our new home in Hoi An is quite nice. Heck, I even have an office now. What more could I ask for?

What excites me most about a new place though is the opportunities that await. Especially the opportunity to start with a clean slate.

Got lazy in your last location? Got into a routine of snacking on junk food at night? Got routinely distracted by a TV show instead of focusing on work? No problem. It all doesn’t matter once you get to a new place. You’re starting over.

Forget new year resolutions. Just move when you need to start over :). I’m kidding of course… but there certainly is some truth to it.

Let’s get down to the stuff that really matters. How did SEODagger.com do – income wise – for February?

NOTE: As always, this report is ONLY for income generated using this blog. Anything that is generated by my dozens of other sites, side projects, and business partnerships will not be shared here.

With that being said, how did SEODagger.com do?

I’ve never actually broken down what my expenses for this blog were, mostly because there weren’t any worth mentioning.

For February I did have some expenses though:

To give you an idea:  With that kind of money here in Hoi An, Vietnam, I could go out for dinner every day of the month, eat a large local meal and wash it down with a large beer afterwards, and then still have money left over at the end of the month. Just one of many reasons I love South East Asia.

Considering how short the month was and how little time I actually had to work on the blog, I think it did pretty good. It was definitely another step in the right direction.

Since starting this “make this blog profitable” challenge 6 months ago, I haven’t had a single month where it wasn’t profitable. In fact, even when I reinvested some money into this blog (like I did for February), it came out making a profit.

Which is why I recently decided to slightly increase the time I spend working on this blog each week.

I know I always said it was supposed to be a very part time thing, and it will continue to be that, but I want to step things up a bit and start teaching things via video as well.

As of right now I do one blog post per week and I plan on sticking with it in the foreseeable future, but am planning on doing one video per week as well.

The reason for this is twofold:

My dad would have called this “killing two birds with one stone”. It’s a double win in my books.

So be on the lookout for that. I will likely send out an email when my first video goes live, so be sure to opt in to my newsletter on this site (if you haven’t already done so).

Also, since I don’t rely on this blog to make a living, I need to start reinvesting the money it generates to help me catapult SEODagger.com into greater success quicker.

I realized that when I came across another blogger who reinvests half of all their earnings back into their blog – every month. This helped them propel that blog forward fast, resulting in quick income growth.

So expect my expenses to grow over the next few months 🙂

This month (March) is the 6th month that I have actively worked towards making this blog profitable. Considering it has been profitable since month one, it’s time to bust out of “maintenance mode” and get into “growth mode”.

I plan on doing that by starting to market it more aggressively through video and paid advertising methods.

I will also continue to include the expenses of this blog in future income reports. The last thing I want to do is make someone believe that there are no expenses to owning a blog.

As always, if I missed something or you simply have a question, please leave a comment below.