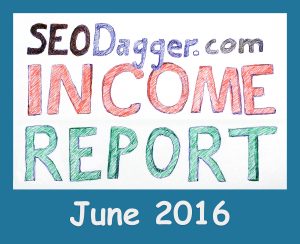 Even though I didn’t work on my online business a minute longer than I had to in June, it was my most profitable month online in the last eleven months.

What’s interesting is, it wasn’t just one income source that made such a big difference. It was a combination of a few unrelated income streams that all spiked a bit – resulting in a fairly profitable overall month for me. It was very satisfying to say the least.

To celebrate, I decided to upgrade a few of my work tools.

If you read my last income report, I mentioned that we are visiting family in Kelowna, BC. We’re still here. We had planned on being in Canada for 3 days, but looks like we will be here for 7 weeks total instead.

It’s awesome to have this kind of freedom and flexibility. Being here and being able to take time away from my online ventures – to spend quality time with family and to help them with everyday tasks, home renovations, etc – made me realize just how blessed I am to not have to report to a boss anymore.

It’s not to say I didn’t do any work. I did. I had a client contract to finish up, write an income report, and a few other small things that were time sensitive, but overall I did not work more than a couple hours per day (MAX) in June.

I’m hoping it did not reflect on this blog too badly. Let’s find out how we did 🙂

IMPORTANT: I never include earnings from ventures unrelated to this blog. I own and am a partner in a bunch of online business ventures, but – for the sake of a fair case study – only earnings directly related to SEODagger.com will be noted.

I really ought to invest more in this blog to help it grow faster, hehe. Instead of pocketing the money each month, I should be reinvesting it. It’s something I need to do a better job with.

Total expense for SEODagger.com in June: $55.97

Although June was the highest income month this year for SEODagger.com (when not counting RankCrew credits), it came in second place after expenses.

This left exactly $119.91 in spendable cash in my wallet.

As I have been saying for almost a year now: Not bad. Not bad at all considering how little work I put into it these days.

June was actually a good month for me. Despite not working a whole lot more than I had to, I managed to wrap up a couple projects I had been working on for months. It felt good.

We got another 2 weeks left in Canada before heading to Mexico for 6 months. Meaning for the next couple weeks I will be focused on spending time with friends and family before getting busy finding a place to call home for the next chapter of our life. I’m somehow excited about it.

I was born in South America (in Paraguay) and grew up there as well (in Bolivia), so I’ve been longing to make my way down that way again. Although still a stretch away, Mexico is the first step in that direction.

Once settled down in Mexico (likely at the end of July), I will get back to working on my projects again. One of them being this blog – SEODagger.com. I got a bunch of good stuff planned for it to launch it to the next level so – if you aren’t already – subscribe to my newsletter and follow me on social media to stay in the loop.