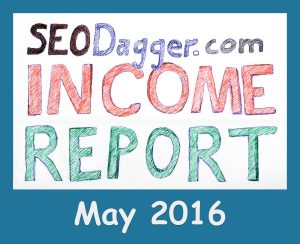 There are 10 days left in the month and I am finally sitting down to write the income report from the month before. This is bad. This is real bad.

May was our last full month in Asia. The plan was to spend 6 months in Hoi An, Vietnam to focus on work. Because visa requirements changed, we would have had to exit the country after 3 months and then come back in again, and although that wasn’t a big deal for us (we usually take that as an opportunity to go on a short vacation to a neighbouring country), we decided we might as well go home to Canada.

Although earlier than planned, Canada – especially Kelowna BC – is beautiful this time of year. So long story very short, we will be spending a few weeks between Calgary and Kelowna – visiting our families – before heading on to our next destination: Mexico.

IMPORTANT: I never include earnings from ventures unrelated to this blog. I own and am a partner in a bunch of online business ventures, but – for the sake of a fair case study – only SEODagger.com earnings will be displayed here.

Something that I realized this month: I do have a decent amount of income coming in every month that I could put in these reports IF I treated SEODagger.com as it’s own business rather than it’s own blog.

In other words, if I were to feature all my SEO type income on this blog (things like client work, SEO consulting, PBN domain name sales, SEO product sales, etc), these reports would look pretty decent (think low to mid 4 figures more per month than what any reports have been so far). But – for the sake of showing what it takes to build a profitable site from the ground up –  I have been (and will continue to) only show income earned as a direct result of this site.

And that is just from the SEO niche. I am also in a bunch of other niches that are a whole lot more profitable than the SEO niche is.

I am not saying any of that to brag, but rather to put things in perspective. There is a reason why I have only been working on this blog for a couple hours a month these last 3 months or so. It simply hasn’t been a priority.

With that being said, let’s look at May’s income for this blog.

I know SEODagger.com earned me more than that already this month (June), so I’m optimistic it will pick up again. And again, considering all I have been doing is these income reports for the last few months, I am surprised it is doing as much still as it is.

As mentioned earlier, May saw our personal live’s a lot busier than planned. This didn’t leave us with as much time to work on our businesses as we had hoped and as a result things started falling behind a bit.

But we’re not complaining.