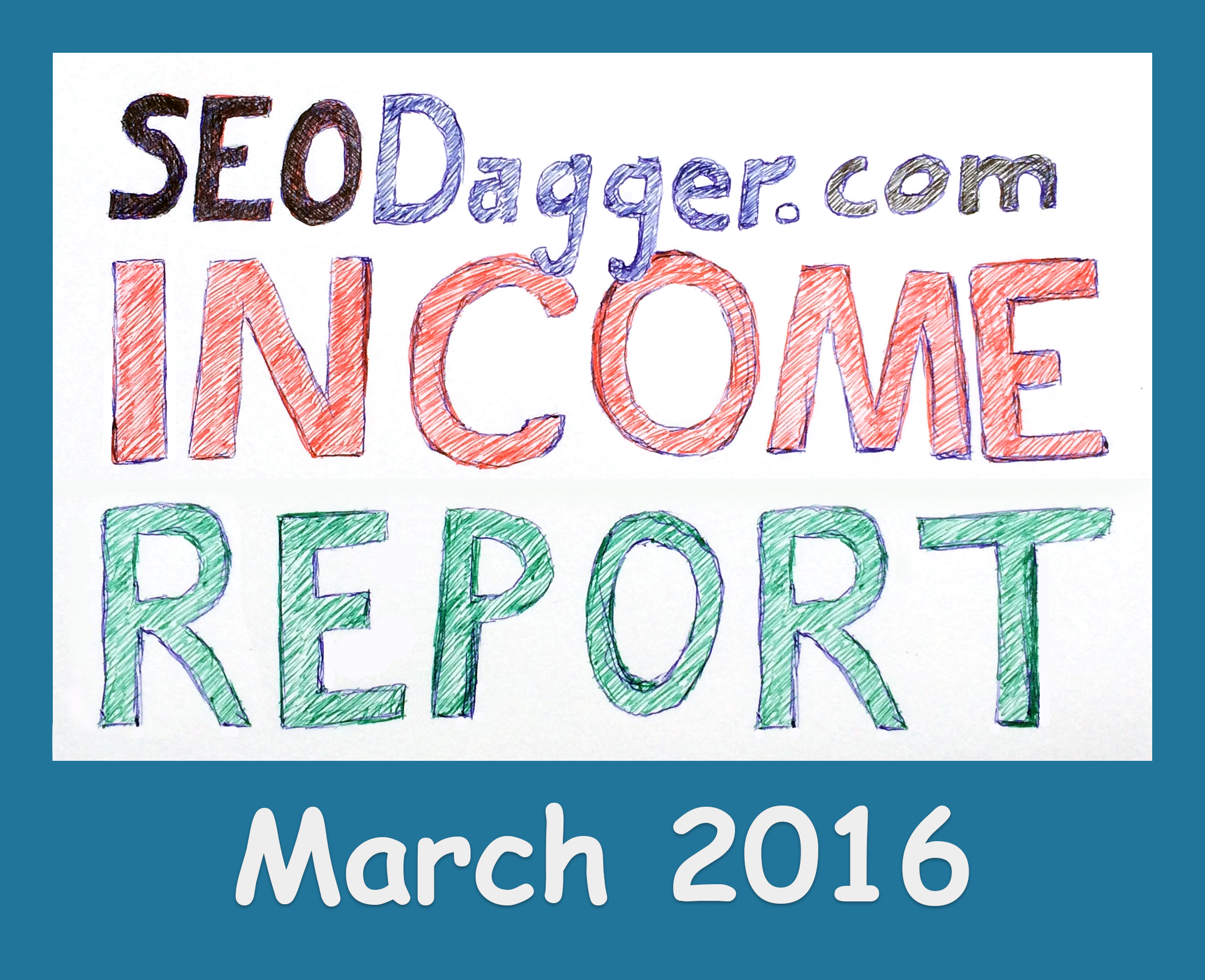 It’s been two weeks since my last post. I never thought I’d break my commitment to posting at least once a week so soon, and yet I am happy I managed to stick it out for so long.

Exactly six months. This is income report #6 so, I’ve been religiously posting at least one post per week for six months now.

Why did I skip a post last week (and almost this week)? Because I got family visiting from Canada. Not just my mom and her husband, but my sister as well.

As hard as it was for me to skip a post last week (I honestly was guilt stricken), I was reminded why we start our own businesses in the first place: to be able to take time out when needed.

With that being said, I believe March will have been the WORST month to date (earning wise). I’m doing something drastic to address that though. I’ll talk a bit more about it later.

For now, let’s dive into the numbers!

Please note: I will not include earnings from ventures unrelated to this blog. I own and am a partner of a bunch of online business ventures, but – for the sake of a fair case study – only SEODagger.com earnings will be displayed here.

Here’s how we did:

I did spend some money on SEODagger.com this month as well. Here is the breakdown:

I actually didn’t take any money home from SEODagger.com this month. In fact, I spent more than it earned me.

As disappointing as it is, I’m not going to gripe about it just because I’ve been hoarding SEODagger.com earnings for nearly six months and – as is inevitable – sooner or later you have to buy straw to feed the cow.

In this case, I look at backlinks as straw and this blog as the cash cow 🙂

So in total I lost $51.05 with this blog in March. I already know April will be a lot better so I’m okay with that, hehe.

In my last income report I talked about getting into video training for this blog. I even finished shooting a couple videos before realizing they were crazy blurry.

I discovered my iPhone (my secret video shooting weapon) got some dust INSIDE the camera lense which causes all pictures and videos to get blurry. It’s apparently a common problem with that model of iPhone.

With family coming for an extended visit and other projects taking up plenty of my time, I decided to scrap the video idea for now.

Having said that, I’ve started doing guest posts on a LARGE scale to boost the traffic and rankings for this blog. I will write a more detailed post about it once I have the strategy fine tuned but will say this: I got myself a crazy busy few weeks lined up 🙂

So going forward (at least for the next few weeks), I may not write a post every week on this blog, but will be writing posts on other blogs to promote SEODagger.com.

SEODagger.com cost me $51.05 in March. If I hadn’t done the press release, I would have at least broken even, but no regrets. I consider that press release an investment for the future of this blog.

In other words, the strong backlinks I got from that press release helped create a stronger foundation for this blog. Any backlink building I do going forward will – as a result – be a lot more effective.

Going forward I will be doing a lot more “free” backlink building. Especially in the form of guest posting.

For whatever it’s worth, I’m really hoping I will never run into the negative earnings with this blog again. It sort of defeats the purpose, doesn’t it? Hehehe 🙂